There are few people in my life I admire more than my father. My father is the one who taught me how to swim, showed me my first BASIC programming, painstakingly explained algebra to me in fifth grade when I got annoyed at the confusing methods our my math teacher was teaching us, and demonstrated to me the value of problem-solving in high-anxiety situations when I was four by locking me in the child restraint seat and leaving me in the garage. I still turn to him when I’m in need of advice, support, or a good laugh.

Those who know me well know that I loathe Valentine’s Day. Part of that is just me being bitter—I’ve been in a stable relationship on Valentine’s Day exactly once—but a lot of it’s also that I don’t quite get why, on February 14th, everything is just supposed to be so much more hunky-dory than any other day. It’s a day created by card and flower companies to make sure you’re buying their products year-round, since otherwise, they’d have to go from Christmas to Mother’s Day without any real sales. If you really want to do something that will be romantically appreciated, in my experience, you’re much better off doing something random and out-of-the-blue when it’s least expected and your S.O. is feeling down than on a day whose main icon is a naked kid with bow-and-arrows who wanders around shooting people in the name of love. It’s like we have a whole holiday for John Hinckley.

So a few days ago, I was on the phone, whining to my dad about throwing a Fifth Annual F------ Valentine’s Day party and trying to figure out my personal life. My dad listened thoughtfully, and then began explaining to me what I was doing wrong.

The problem, he said, is that I date girls serially. Let’s let V be potential difference between dating girls and doing something productive, I be current of love, and R be resistance to current flow. The problem with serial dating is the same as with serial circuits. If resistance starts to increase, you’re stuck: because V = IR, and R is increasing, I must decrease to hold the equality. Worse still, because P = IV, you’re just not going to have as much power with the increased resistance. Note on the above diagram that current is a lousy 214 mA, and we’re only able to get 1.93 “jewels” from our relationships. This is even worse than it seems: because there’s only one path—through all relationships—you’ll end up spending the majority of your energy on the relationship with the greatest resistance, which is exactly the opposite of what you want to do.

Worst of all, if (horror of horrors) you actually blow out one of your relationships, all current stops until you can manually patch things up. Your love life will be at least momentarily in ruins. Now let’s examine the case where you’re dating multiple girls at once. Even before we try the (admittedly more complicated) calculations, we can already tell the situation has significantly improved. Because we’re dating in parallel, we compensate automatically for higher resistance. Even though Lisa clearly is just not putting out, the result isn’t the massive slow-down we saw before, but instead results in conservation of energy, as you expend less effort on a mostly dead branch and focus instead on more promising branches. Whereas before, Lisa sucked the majority of our energy, now Sally and Judy do—at 16.2 and 9 jewels, respectively.

A broken circuit also no longer really fazes us. In the case that one of the relationships completely evaporates (which, let’s face it, Lisa’s not heading in a good direction), we’ve still got other branches to take up the slack. Best of all, because Lisa was high-resistance anyway, her departure barely affected net current, which decreases from 3.1 A to 2.8 A—both radically higher than net series current. 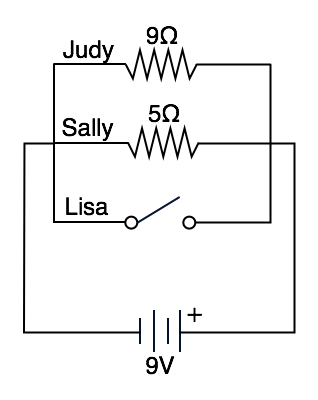 And with that simple metaphor, I suddenly felt much better about how things are going in my life right now. Dads are awesome.

So, in summary, dating serially is for chumps. If you really want to have a better fail-safe, be less affected by resistance, and have a wonderful net increase in power, go for parallel relationships. It’s the only way.